September 6 - 19: Movies and Music This week 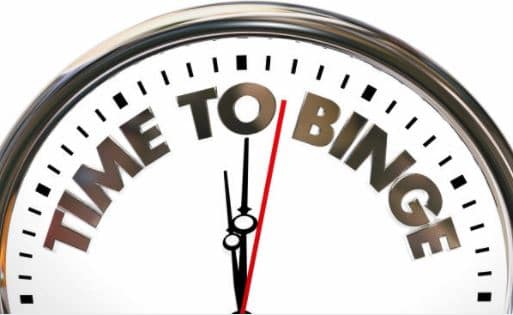 Do you have 1,747 minutes to spare? You do? Then you should totally binge watch the first three seasons of Westworld! Allow me to give you a few tips for binge watching:

On second thought, don't follow any of those tips. Eye clamps look like they hurt, and why would you need coffee when you can't close your eyes? Just make yourself comfy and enjoy!

Orphan Black is a Canadian sci-fi police procedural that will grab you from episode one and never let you go for all five of its seasons. Filled with likeable characters, cutting edge science, and glimpses of a dangerous, frightening future, Orphan Black is definitely binge-worthy! Tatiana Maslany's performance is fantastic beyond words.

Finally, there's Life on Mars. Originally created in the UK and then remade for American audiences, Life on Mars is another sci-fi police procedural. The story follows Sam Tyler, a police officer who is hit by a car and wakes up in 1973. Is he in a coma? Is he dead? You won't find out until the very end and the shows storyline and characters will keep you on the edge of your seat until then. Both the British and American versions are worth watching, though the stories are told differently.

TV has changed a lot in the past decade. There is an incredible amount of content available on the streaming platforms like HBO Netflix, Hulu, AppleTV, and so many more, but very few can afford to subscribe to all of those services. Your library can help. We purchase DVD and BluRay copies of some of the best series and TV movies and they are great for binging.

Try Fargo, a series based on the Coen brothers’ movie. Each season features a different cast and is set in a different era showing the darker side of the outwardly polite and cheerful upper Midwest.

While the streaming services are great for what they do, none of them offers a deep archive like your library can. Try binge watching the outstanding films of the Japanese master Akira Kurosawa. Known for his samurai films, he also created great films of then contemporary life. With 25+ Kurosawa titles in our collection to choose from, this binge could take a while.

I like binging on different genres of international music. Lately I’ve been listening to a lot of Desert Blues – the music of Mali and Niger and the Sahara desert region of northwest Africa by artists like Tinariwen, Ali Farka Toure, Bombino, Songhoy Blues, Etran Finatawa and Tartit. This music is deep; it rocks and is as hot as the Sahara sands.

There were some shows I wanted to binge, but I had to watch them as they were being broadcast each week. My Brilliant Friend and The Plot Against America were two that made me wait a whole week in suspense for the next episode. Luckily these are now on dvd and bluray. Here are some of the shows I binged or wanted to binge.

Babylon Berlin seasons 1&2 and season 3 - Babylon Berlin is one of the most critically acclaimed European television shows of the decade, a sumptuously paranoid thriller set in 1929 Berlin, a metropolis in turmoil.

My Brilliant Friend -  A tale of best friends Lila and Elena, in 1950s Naples. As an elderly woman, Elena tries to unravel the mystery of her brilliant friend, who also became her worst enemy. In Italian and Neapolitan dialect, with subtitles.

The Plot Against America - Based on Philip Roth's acclaimed novel, this limited series brilliantly imagines an alternate American history during WWII. Told through the eyes of the Levins, a working-class Jewish family in Newark, New Jersey, the series charts the political rise of aviation hero Charles Lindbergh, a xenophobic populist who captures the presidency in 1940 and turns the nation toward fascism.

Le Tunnel - When a prominent French politician is found dead on the border between the UK and France, detectives Karl Roebuck and Elise Wassermann are sent to investigate on behalf of their respective countries. The case takes a surreal turn when a shocking discovery is made at the crime scene, forcing the French and British police into an uneasy partnership.

Big Little Lies season 1 and season 2 with Nicole Kidman, written by David E. Kelley Based on the book by Liane Moriarty.

The Undoing - This one is also with Nicole Kidman and written by David E. Kelley, but it's not as good as Big Little Lies. Still bingeable though.

The passing of a great actor leaves us with a legacy that we can binge in tribute to his great career.

Michael K. Williams brought one of the great television characters of all time to life; Omar Little in the television series, The Wire. The intensity, the complication and the surprising humor of his performance is worth exploring over all the seasons of this landmark program.

Finally, it's worth checking out his 2021 Emmy nominated work for Outstanding Supporting Actor in a Drama series for his performance as Montrose Freeman in Lovecraft Country. Williams plays the father of the protagonist who knows some of the monstrous secrets that abound in this series that fuses Lovecraftian horror to the horrors of the segregated US of the 1950's.

Movies & Music - Questions of the Week

In the Friends episode entitled “The One with Five Steaks and an Eggplant,” Ross is a huge fan of this band and plans to see them in concert as a birthday celebration.