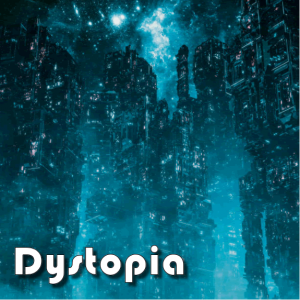 Anohni's 2016 album Hopelessness is actually just that: hopelessness in musical form. From drone bombings to digital spying to state-sanctioned executions to environmental catastrophes, this collection of protest songs has it all. The upside is Anohni's blunt honesty in her lyrics and otherworldly voice. This isn't a fun album by any stretch, but it will make you think.

Dystopian films are plentiful and not all of them are great. 2016's Into the Forest is an exception. Staring Ellen Page and Evan Rachel Wood as sisters navigating a world that has lost electricity, this film is extraordinarily moving and contains many moments of absolute beauty.

One of the first books that really got me hooked on reading children's literature as an adult was The Giver by Lois Lowry. Besides setting me on the path toward becoming a Children's Librarian, it also led to a new era of dystopian novels written specifically for children and teens, as the majority of that genre before the 1990s was written for adults (sometimes read by children or teens). In the decades since then, I've been an avid reader of similar books that explore what future life on earth (or other planets) could be like "if only..."

I'm clearly not the only one who enjoys these kinds of stories, too, since so many of them have been adapted into movies. A few of my favorites:

While a few of these movies have sequels, all of the books are part of larger series, so you can fully emerge yourself in these worlds!

Animals by Pink Floyd – Loosely based on George Orwell’s novel 1984. This album describes various classes in society as different kinds of animals: the predatory dogs, the despotic ruthless pigs, and the "mindless and unquestioning herd" of sheep. Apart from its critique of society, the album is also a part-response to the punk rock movement, which grew in popularity as a nihilistic statement against the prevailing social and political conditions, and also a reaction to the general complacency and nostalgia that appeared to surround rock music.

Replicas by Tubeway Army - A loose concept album, Replicas was based on a dystopian book Tubeway Army frontman Gary Numan hoped to complete someday, set in a not-too-distant future metropolis where Machmen (androids with cloned human skin) and other machines keep the general public cowed on orders from the Grey Men (shadowy officials).

Year Zero by Nine Inch Nails – Recorded in 2006 this a concept album that criticizes contemporary policies of the United States government by presenting a dystopian vision of the year 2022. Trent Reznor in an attempt to break away from his typically introspective approach, drew inspiration from his concern at the state of affairs in the United States and at what he envisioned as the country's political, spiritual, and social direction. Even though the fictional story begins in January 2007, the timeline of the album mentions historical events, such as the September 11 attacks and the Iraq War. From there, fictional events lead to worldwide chaos, including bioterrorism attacks, the United States engaging in nuclear war with Iran, and the elimination of American civil liberties at the hands of the fictional government agency The Bureau of Morality. A columnist of the Hartford Courant commented, "What's scary is that this doesn't seem as far-fetched as it should.

One of the first dystopian movies I ever saw was the original Blade Runner, which was 38 years ago. At the time I didn't know I was witnessing an iconic film that gave birth to the cyberpunk subgenre and influenced so many films to come, with its interplay of film noir, sci-fi and probing questions about what it means to be human. It's a beautiful film, not to be missed, with a brooding score by Vangelis. I'm definitely going to watch it again, but I'll probably watch the director's cut.

More recently, I experienced another dystopia, in the miniseries The Handmaid's Tale. The United States is now Gilead, a fundamentalist Christian autocracy. Although taken to an extreme, the basic premise doesn't seem far-fetched. The most interesting scenes to me were the flashbacks that showed how this takeover occurred in spite of massive resistance, the refugees fleeing to Canada, via an "underground railroad" of safe houses, and the "Little America" neighborhood of new American-Canadian immigrants. There are aspects of this series that are disturbingly realistic. The following two seasons take the story past the book by Margaret Atwood. It has also been made into an opera by Poul Ruders, which is available on cd.

The classic dystopian novel, 1984 has also been made into an opera by Lorin Maazel. I haven't heard the opera, but I've seen the movie with Richard Burton and John Hurt. Deeply disturbing and prescient. Although the acting is terrific and it's a faithful adaptation, it will be best appreciated if you've read the book.

The Plot Against America is a mini series that aired recently on HBO. This is a fabulous adaptation of the book by Philip Roth, which depicts an alternative history in which Franklin D. Roosevelt is defeated in the presidential election of 1940 by Charles Lindbergh. It's so subtle and nuanced, which makes it totally believable. Who wouldn't vote for a dashing American hero whose campaign slogan is "Vote for Lindbergh, or Vote for War"? The very plausible plot is inspired by actual historical events, and is told from the point of view of Philip Roth himself, as a child growing up in Newark, New Jersey.

One other dystopian film I'd recommend is In Time. In Time envisions a future where time is literally money. People are born with a 25 year life span. However they can increase their age allotment by earning, inheriting or stealing time.

I can't quite put my finger on it, but synthpop and experimental electronic music seem like good dystopian music to me. If this genre doesn't always make for a good apocalyptic soundtrack, it may at least make you occasionally uncomfortable. Moving Parts I and 2 are good places to start exploring, 7 Million and Neon are good ambient follow ups, and even Guten Tag had elements of the sounds I was looking for this week all available on Freegal. I was inspired to listen to synthpop this week after hearing the track Cyberspelunking on KFJC. *

Also, I found it interesting that the Great Courses has a series on utopian and dystopian media. You can check it out on Kanopy, audiobook and DVD.

Even though dystopian films may not exactly be my thang, here are a couple that I was pleasantly surprised by:

Also I found one more, that I have yet to watch but wanted to include, mostly because both the title and the premise caught my attention:

Hip hop super-trio Deltron 3030 (comprised of rapper Del the Funky Homosapien, DJ Kid Koala, and producer Dan the Automator) paint a dystopian picture of the year 3030 on the album of the same name, Deltron 3030. You can also stream/download the albums Deltron 3030 and Deltron 3030 – The Instrumentals on Freegal.

In 2008’s animated film WALL-E, Earth is a garbage-covered wasteland that has been abandoned by humans, and WALL-E is the sole trash compactor robot left to clean it all up. Despite its dark premise, the film is still filled with hope, laughter, love, and lessons that viewers of all ages could take to heart.

I find Dystopians disturbing. Seeing the potential for a dystopia in our current times, is the part that is truly terrifying.

The song, "In the Year 2525" by Zager & Evans tells a dystopian story based on a sixties viewpoint but it still feels relevant.

Sometimes dystopias hide behind the facade of a utopia as in Chairlift's "Planet Health," the second song on their Does You Inspire You album, where everyone is spaced out but a dark fate awaits them all.

Both songs available on Freegal.

Underneath the hilarious comedy of director/screenwriter Mike Judge's movie Idiocracy is a dark message about humanity's future.

Finally, director Michael Radford's Impressive adaptation of George Orwell's 1984 is a dark vision of a paranoid, deceptive and totalitarian society crushing the light out of the world. The Criterion Blu-ray features an exceptional transfer and an alternative soundtrack which enhances the film.

This full-length album version of this apocalyptic song ends by asking, “Mommy, why does everybody have a bomb?”.