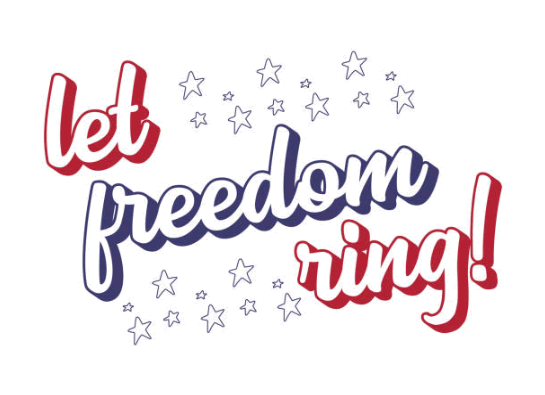 Giddens' second studio album is named for and features a cover of The Staple Singers' 1965 civil rights protest song. "Freedom Highway" was nominated for Album of the Year at the 2017 Americana Music Honors & Awards.

Hillary Swank stars as a teacher who tries to heal racial divides among her students by inspiring them to write. Based on a true story.

This week I found a couple of lecture series that look at American history with an exploratory and questioning tone. The first was The Skeptic's Guide to American History, opens a new window, which is quite long, but each lecture is only about half an hour. The second is The Unfinished Nation series, opens a new window , which is even longer and goes even further back into the history of North America. Both are available on Kanopy, opens a new window. If you've got some free time, now is a great time to examine our country's history.

Around the 4th of July I usually get a hankering to listen to some American music by some of our noted songwriters and composers. MediciTV, opens a new window has plenty of performances of works by music makers and creators from the USA.

As Independence Day approaches, I thought about movies that serve to remind us of our cherished freedoms as American citizens. Happy 4th!

THE CITIZEN, opens a new window
This movie, inspired by true events, reminded me that there is always more than one side to any story. People are not always who you think they are, we need to listen and look for truth.  I first saw this movie at the Cinequest Film Festival, opens a new window and it was voted as an audience favorite that year!

ONE VOTE , opens a new window
The right to vote is an important place to express our voice as citizens. It is both a freedom and a responsibility. This is a small film about a BIG topic: American Democracy. Let freedom ring!  Both films are available on Kanopy, opens a new window.

No more auction block for me , opens a new window– Paul Robeson

Aleut Story , opens a new window
In the turbulence of war, in a place where survival was just short of miraculous, the Aleuts of Alaska would redefine themselves -- and America. From indentured servitude and isolated internment camps, to Congress and the White House, this is the incredible story of the Aleuts' decades-long struggle for human and civil rights. Narrated by Martin Sheen and original music score by Composer Alan Koshiyama, the program draws compelling parallels to the present, as our country grapples with the challenging question of the balance between civil liberties and national security.

All from Alexander Street, opens a new window.

1776 , opens a new window
1776 is a delightful musical celebration of the founding of The United States of America. The story centers around the familiar historical characters as they organize a movement for independence from Mother England. All events lead up to that most significant date, July 4, 1776, when the Declaration of Independence was signed. This is the DVD "restored" version which runs ca. 166 minutes -- longer than the theatrical release cut, yet shorter than the laserdisc "restored" version.

Fanfare For the Common Man, opens a new window:  You've heard this piece.  It's been used extensively in films and television.  Although it is so patriotic to Americans, some feel it is the "official fanfare for all the common people of the world."  You can hear this piece along with Lincoln portrait, Canticle of Freedom and others, performed by the Seattle Symphony Orchestra, with readings by James Earl Jones, opens a new window on Portraits of Freedom, opens a new window.

The Freedom to Marry, opens a new window traces the marriage equality movement's historic progress in the effort to form a more perfect union.

A few of my favorite bands from my university years have also put together great albums for children, with a focus on peace, love, and freedom:

I Got Shoes, opens a new window by Sweet Honey in the Rock brings freedom and justice to all ages in their characteristic style of conversational, communal music.

Songs of Peace & Love: For Kids & Parents Around the World, opens a new window by Ladysmith Black Mambazo entreat us all to come together and help build a better world.

And, A Life of Song, opens a new window by Ella Jenkins celebrates the youthful experiences and influences of "The First Lady of the Children's Folk Song."

One of my all time favorite sources of how the American system works is the Schoolhouse Rock video series, opens a new window.  Check out not only how legislation passes but also nifty hints on addition and grammar, all delivered with catchy tunes., opens a new window

Marvin Gaye’s awesomely ‘80s performance of “The Star-Spangled Banner” made the crowd go wild at this event in 1983.