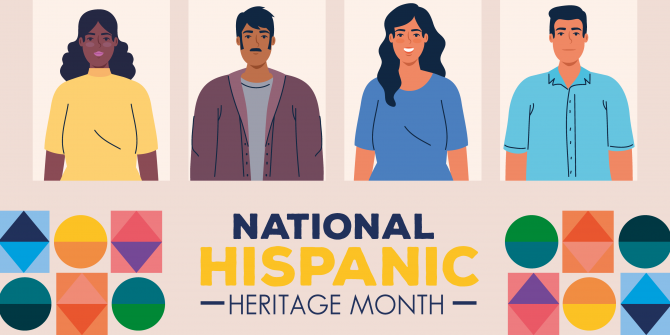 I was a young Anglo teenager living in Virginia when I was introduced to the world of what is called Latin music by listening to the band Santana’s, opens a new window rousing set on the Woodstock movie soundtrack album. After buying the first two Santana albums I started discovering other great Hispanic artists. Tito Puente, opens a new window wrote Oye Como Va, opens a new window, available on Freegal, opens a new window, which was a hit for Santana but what did the original sound like? Wow, it was great! My ears were opened and I learned about so many different artists.

One of my very favorite artists is Mexican singer-songwriter Lila Downs, opens a new window.

In addition to performing her own compositions, she also infuses indigenous Mexican influences into her music and has performed songs in multiple indigenous languages including Mixtec, Zapotec, Mayan, Nahuatl, and Purépecha. Her voice is beautiful and strong, and she is a delight to listen to. My favorite album of hers is "La Cantina...entre copa y copa, opens a new window,"  particularly both the English and Spanish versions of the song "La cumbia del mole, opens a new window" , available on Freegal, opens a new window, which pays homage to the traditional Oaxacan dish.

Finally, you'd do well to listen to Grammy winning, opens a new window Mexican guitar duo Rodrigo y Gabriela, opens a new window. You won't believe what these two are capable of on acoustic guitars as they incorporate metal, flamenco, and rock into their instrumental music. Truly amazing stuff. Their 2006 self-titled album, opens a new window, was the first I heard of their and I was blown away. They recently showed off their brilliance on this Tiny Desk Concert, opens a new window.

On October 6th, Linda Ronstadt, opens a new window will receive the Hispanic Heritage Foundation's Legend Award, opens a new window in a musical tribute on PBS.  Her Mexican and Latino heritage is a huge source of inspiration on her music. In fact she cites it as the major source. My favorite album of hers is Canciones de mi padre, opens a new window, the album which features the mariachi music she listened to growing up. Her singing style is modeled on the great vocal traditions of Mexico, especially singer Lola Beltran, opens a new window. The album uses the 3 best mariachi bands in the world: Mariachi Vargas, Mariachi Los Camperos and Mariachi Los Galleros de Pedro Rey. There is also a dvd, opens a new window of the performance which she took on tour around the country, and a wonderful new documentary, opens a new window about her life and work,

I recently watched the visually stunning Birds of Passage, opens a new window, a classic tragedy of epic proportions, directed by Ciro Guerra, opens a new window of Columbia, who also helmed Embrace of the Serpent, opens a new window. Based on actual events from the 1960-80s, in the Guajira region of northern Columbia, and told in four cantos and an epilogue, it depicts the tragic loss of cultural identity among the Wayuu people, as they succumb to the lure of the drug trade. The film also incorporates the magical realism influences of author Gabriel Garcia Marquez, opens a new window, whose maternal family was Wayuu. The crew was 30% Wayuu and the movie is in Wayuu, Spanish and English, with subtitles. A spectacular, thrilling, but ultimately tragic film.

I can't leave without mentioning the immense influence on classical music and tango of Astor Piazzola, opens a new window. This composer and bandoneon player was born in Argentina, of Italian immigrant parents. He revolutionized the tango, which became known as tango nuevo. His work was acclaimed in Europe and Japan and he popularized the tango worldwide, but the radical nature and upending of the traditional tango created such a fervor in Argentina that he was sometimes met with threats of violence. You can hear his compositions, including the haunting and beautiful Oblivion, on Medici.tv, opens a new window.  For traditional tango, you can't go wrong with the great Carlos Garde, opens a new windowl.

I haven't before encountered a documentary quite like The Rise and Fall of the Brown Buffalo, opens a new window, which tells the story of Oscar Zeta Acosta using actors, due to there not being much archival footage of Acosta. His life led him to being a lawyer for Chicano people in the late 60's and early 70's in Los Angeles, but his style was controversial.

I enjoyed jumping into Visiones, opens a new window because it introduces the viewer to a lot of different artists and styles of art in just half an hour. I'm currently taking a class about hip hop and episode 4 of this series was a great addition to what we're learning.

Finally, I learned about Willie Velasquez in Your Vote is Your Voice, opens a new window. I still have voting on my mind after last week's theme. His organization, Southwest Voter Registration Education Project, still exists today and has registered millions of Latinos to vote. All are available on Kanopy, opens a new window.

The following list is only a miniscule representation of the variety and vibrancy of contributions from Hispanic and Latinx artists to the landscape of popular music in America. But they are also some of my favorites.

Ozomatli pays homage to the multicultural influences of Los Angeles by combining elements of rock, funk, jazz, hip hop, and reggae with their Chicano music roots. Their dynamic style can be summed up with the tracks “Cumbia de los Muertos” and “Cut Chemist Suite” from their 1998 self-titled album. Still as energetic as ever, their 2017 album Non-Stop: Mexico to Jamaica features covers of some famous Latin tunes performed with a reggae twist, including “Como La Flor” by Selena and “Evil Ways” by Santana. Check out Non-Stop: Mexico to Jamaica on CD or stream/download it on Freegal.

Jorge Santana, younger brother of Carlos and a guitarist himself, was also in a band—Malo— and their song “Suavecito” is a shining staple of ‘70s Latin rock and quite the sweet love song. Borrow Malo on CD or listen to them En Vivo/Live on Freegal.

Sing and groove along with Selena, the “Queen of Tejano music”, with this lyric video for the upbeat dance hit “Bidi Bidi Bom Bom”. Explore our library collection for more of the Selena sound.

Last but not least, Puerto Rican rapper and singer Bad Bunny brings his bold brand of Latin trap and reggaeton to the masses. Stream or download the album YHLQMDLG, featuring the infectious tracks “Si Veo a Tu Mamá” and “Pero Ya No”, and discover more Bad Bunny on Freegal.

America Ferrera has been one to watch ever since her feature film debut, REAL WOMEN HAVE CURVES. She was a teen at the time, and the film was an instant winner at the Sundance Film Festival in 2002. I think it set a tone for a very interesting body of work by this young actress.

She might be most recognized for her role as fearless Betty Suarez in the delightful TV series, UGLY BETTY. In 2007 she won various Best Actress Awards for her work on that show. Notably an Emmy Award, which was a first for a Latin woman in that category.

Next on my own watchlist is a film she did in 2010 about two cultures coming together for OUR FAMILY WEDDING. Looks to be a romantic comedy that tells how love conquers cultural clashes. A good message anytime.

In the biopic CESAR CHAVEZ, she plays Cesar's wife. This 2014 film is a perfect one to watch this month to learn about the life of an important Hispanic civil rights activist.

Altogether, it has been interesting to watch America Ferrera's progression on and off the screen. I am really appreciating how she uses her voice for entertainment as well as for advocacy of human rights. Take a look at these:

HALF THE SKY: Turning Oppression into Opportunity for Women Worldwide

OUT OF REACH (from series America Divided) on kanopy

While this is not a complete list of her work, at 36 years old America Ferrera is still one to watch!

Over the years, and recently, our libraries have hosted a variety of fantastic Latinx Children's Music performers. You and your family may have gotten to experience their music at your favorite library or via Zoom/Facebook LIVE or maybe you weren't able to attend in the past. Either way, it's time to bring them back, through their albums available to request from our collections! For fun, playful ways to learn concepts and rhymes, there is 123 Andrés and José-Luis Orozco. Looking for music the whole family can enjoy? Try The Lucky Band (formerly Lucky Diaz and the Family Jam Band) or Nathalia.

Do you want even more traditional songs for children? Marta Gómez offers a nice range on her two children's albums, Coloreando and Coloreando Dos.

And finally, there's always the Putumayo Kids collections to give us a little taste of the Cuban Playground, Latin Playground, and Latin Dreamland. ¡Disfruta la música!

I am a fan of actors who, even when they have a small amount of screen time, often manage to steal scenes from the leads of films. One of my long time favorites has been Lupe Ontiveros. While she often was cast in the role of maids, her skill as an actor often meant that she took scenes from the starring performers she was working with.

One of her earliest and most striking movies is director Gregory Nava's film El Norte. Ontiveros plays a maid who becomes a mentor for two Guatemalan refugees who have come to America to escape violence in their own country. Ontiveros would go on to work with Nava in her most famous role as the murderer of Tejano star, Selena.

Ontiveros' wide range and willingness to tackle any role has lead to her working with some influential figures in film and theater. Ontiveros was a founding member of the Latino Theater company and appeared in both the stage and film version of Luis Valdez's Zoot Suit.

Mariachi High - In small town in Texas there is a high school mariachi band competition every year. In this documentary follows Mariachi Halcon, for a year. You will see the highs and lows of preparing for such a competition. As they compete and perform with musical virtuosity, these teens and the music they play will inspire, surprise and bring you to your feet. This title was found using Kanopy.

Getz/Gilberto – As we honor Hispanic Heritage month, he is just the album to list to. Laid back, playful, and relaxing, listening to this album you will understand why it has been the best-selling jazz albums of all time.

This album was founding on our Bibliocommons catalog.

Not Fancy by Anjelah Johnson - In this audiobook of her 2015 comedy special, you will hear about the comedy career of San Jose, CA native. A former cheerleader for the Oakland Raiders, a member of the comedy show MADtv, which earned her the ALMA award for Outstanding Female Performance in a Comedy Television Series.

This e-audiobook was found on our Bibliocommons catalog.

The multitalented Lin-Manuel Miranda has won all of the following awards EXCEPT for this one.