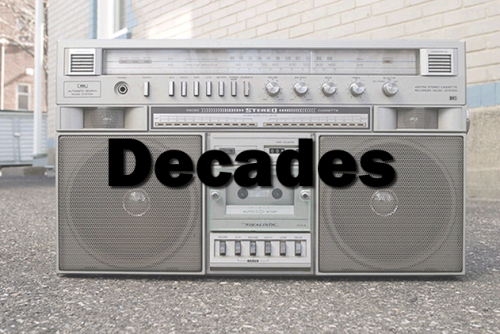 I strongly believe the 90s was the best decade for the rap music. Maybe I'm just getting old, but the majority of current rap singers sound terrible to me. The following is a miniscule list of some of the best rap songs of the 90s:

The 1920s, the Jazz Age, was an amazingly creative decade, with the explosion of jazz into popular entertainment and the high point of silent movies, when they were at their most poetic and expressive.

In jazz, the 20’s gave us some of the best works of Louis Armstrong, Duke Ellington, Ma Rainey, Bessie Smith, and so many others. The classical world saw the influx of jazz and Brazilian popular music in the works of Darius Milhaud (Le Beouf Sur Le Toit and Creation du Monde) and George Gershwin’s Rhapsody in Blue. And one of the most famous and beloved pieces in the classical repertoire, Maurice Ravel’s Bolero was composed in 1928. You can see an electrifying dance performance on Medici.tv.

The latter part of the decade saw the creative peak of the silent movie era, with comedic masterpieces by Charlie Chaplin, Buster Keaton and Harold Lloyd, and stunning works by Carl Theodor Dreyer (The Passion of Joan of Arc), F.W. Murnau (Sunrise) Eisenstein (Battleship Potemkin) and Fritz Lang (Metropolis). Here is a list of the greatest silent movies, many available to stream on Kanopy.

CLASSIC CHILDREN’S BOOKS FROM EACH DECADE AND THE MOVIES THAT THEY INSPIRED.

READ THESE BELOVED STORIES AND ENJOY A TRIP THROUGH TIME WITH FUN FAMILY FILMS.

The 50’s were a time of great change for jazz. Improvisation was changing the way jazz sounded and felt. Not only was this felt in the albums and concerts, but jazz was also having an impact on movie soundtracks, ballet, and photography.

The Man With the Golden Arm, is a great movie showing the downfall and recovery of a musician hooked on drugs. The music composed by Elmer Bernstein adds texture and depth that enhances Frank Sinatra’s Oscar nominated performance.

In 1958, A Ballet in Sneakers : Jerome Robbins and Opus Jazz became a smash hit when it was broadcast on the Ed Sullivan Show and toured the world. The ballet was set to an evocative jazz score by Robert Prince. This piece is included here by NY Export Opus Jazz

The Jazz Loft : According to W. Eugene Smith documents jazz in the 1950’s in New York. Night after night jazz musicians jam in a dilapidated New York loft building, not realizing they are being captured in sound and pictures. Carla Bley, David Amram, Jason Moran, Ron Free, Steve Reich and Thelonious Monk are but a few of the musicians and arts documented.

As with previous posts, I'm taking us back to the 1990s! This time, to feature the first albums of a few of the biggest names in Children's Music.

If Raffi, Hap Palmer, and Charlotte Diamond could be considered the originators of the Children's Music genre, then Kathy Reid-Naiman, Jim Gill, and the Laurie Berkner Band were the second wave, helping to open the flood gates to what is now a wide and diverse musical category while also establishing a new subset, progressive "Kindie Rock."

Kathy Reid-Naiman offers great activities to sing and play with babies, toddlers, and the preschool set on Tickles and Tunes (1997), More Tickles and Tunes (1997), and Say Hello to the Morning (1999). Classics like Open Shut Them, A Smooth Road, Baby-O!, and Zoom, Zoom, Zoom can all be found here. She also offers a version of X Marks the Spot, an activity I first encountered during summer camp in the 1980s, that is perfect for babies.

Jim Gill established his interactive, playful, and zany style of songwriting on Jim Gill Sings the Sneezing Song and Other Contagious Tunes (1993, re-released 2013), Jim Gill Makes It Noisy in Boise, Idaho (1995), and Jim Gill Sings Do Re Mi on His Toe Leg Knee (1999). Crowd favorites like the Silly Dance Contest, Stick to the Glue, My Bonnie, and The Tempo Marches On are certain to get everyone laughing and moving.

Like Jim, Laurie Berkner focuses on the preschool to school-aged crowd. Both have a background in working with children - using music to connect with kids and their parents - and it shows in their engaging, active songs. Buzz Buzz (1998) and Victor Vito (1999) were the first two of what is now over 18 albums and introduced the perennial hits I Really Love to Dance, (Laurie's Got a) Pig on Her Head, Monster Boogie, and I Feel Crazy So I Jump in the Soup. Also like Jim, many of her songs have been made into picture books, including Monster Boogie.

It's always interesting to hear what the first efforts of a favorite artist sounded like and these all hold up over time!

Here are 10 films combining music and movies, one for each year of the 1970s.

1970 - Woodstock: the grand documentary and subsequent soundtrack that captured Jimi Hendrix, The Who and Janis Joplin at the peak of their forms and introduced much of the world to Sly and the Family Stone and Santana.

1971 - Shaft: Richard Roundtree plays the tough private detective but Isaac Hayes’ soundtrack is the even tougher.

1972 - The Harder They Come: Jimmy Cliff stars as the young Jamaican country boy who is corrupted by the big city’s violent ways. The great soundtrack introduced many of us to reggae music.

!974 - Young Frankenstein: Who can forget Gene Wilder as Dr. Frankenstein and the Monster, played by Peter Boyle, tap dancing and singing Putting on the Ritz?

1975 - The Rocky Horror Picture Show: A very different take on the Frankenstein story. Let’s do the time warp again!

1979- Rock ‘n’ Roll High School - A Roger Corman produced high school rebellion fantasy with a soundtrack by the Ramones, their DIY punky attitudes presaging the coming music of the 1980s.

In Country music back in the 1990’s we were hanging with friends in low places, boot scooting with friends on the dance floor, drinking strawberry wine and discovering how forever feels. What is your favorite country song from the 1990’s?

Independence Day
Martina McBride
Album: The Way That I Am
Available on Freegal.

Dust on the Bottle
David Lee Murphy
Album: Out with a Bang and covered in Live in No Shoes Nation.
Available in Freegal

Strawberry Wine
Deana Carter
Album: Did I Shave my Legs for This?
Available on CD.

You’re Still the One
Shania Twain
Album: Come on Over
Available on CD.

The recently released single “Leave the Door Open” by Silk Sonic (the band fronted by the super talented super-duo of Bruno Mars and Anderson .Paak) is so reminiscent of the ‘70s funk and R&B style that I was inspired to dive into the decade when soul music was supreme - the 1970s.

Keep the ‘70s magic going and give these songs and artists a listen:

Isley Brothers – "For the Love of You"
Drift on a memory with The Essential Isley Brothers album on CD or for stream/download on Freegal.

Rose Royce - “Wishing On a Star”

War
A soundtrack of the ‘70s would not be complete without War's magnetic mix of funk, soul, R&B, rock, Latin, and jazz. This band was my first experience ever seeing live music and set the bar ridiculously high.

Funkadelic - “Maggot Brain”
The title track from the 1971 album is basically just a long epic guitar solo by the brilliant Eddie Hazel that was recorded in one take. It’s emotive and emotional without the utterance of a single word in over 10 minutes (aside from the spirited intro from P-Funk mastermind George Clinton).

Bootsy Collins – "I'd Rather Be With You"
Fun Fact #1: Silk Sonic got their name from funk icon and Parliament-Funkadelic bassist Bootsy Collins.

Fun Fact #2: Bootsy Collins was an influential member of the Godfather of Soul James Brown’s backing band in the early ‘70s.

The Stylistics
Stellar, soulful vocals and so many hits from this staple ‘70s soul group. The Best of the Stylistics features favorites like “You Make Me Feel Brand New”, “Betcha By Golly, Wow”, “I’m Stone In Love With You”, and “You Are Everything”.

Take a trip to the 1920’s on Kanopy. These films featured a lot of shocking storylines before the movie industry matured

Aelita is a Russian film about a trip to Mars.

Metropolis has been considered a classic for a long time now. (Also available on DVD)

Diary of a Lost Girl is a visually appealing series of unfortunate events. (Also available on DVD)

Cobra is another visual treat, this time a romance

Parisian Love is a tale of romance gone wrong.

And of course, experimental films of the time are always a weird treat.

The 1940's were a great decade for American films producing so many great films. One of my favorite genres that emerged during this decade is the film noir. A type of film that emphasizes moral ambiguity, often with photography that emphasizes shadowy darkness.

Detour (1945) - Made on a shoestring, with the continuity errors to prove it, this noir about a man who gets picked up by the wrong driver and gets pulled into a murder plot, is famous for its bleakness and one of the great femme fatales of the genre in Ann Savage. Streaming on Kanopy and beautifully restored on Blu-ray in the library.

Mildred Pierce (1945) - The great Joan Crawford won an Oscar for her performance in this film noir of a mother daughter relationship that goes so bad, someone gets murdered. This supremely entertaining film is also beautifully filmed and restored on Blu-ray in the library.

The Stranger (1946) - After creating two masterpieces, Orson Welles began delving into film noir with this film about a government agent tracking down a nazi in disguise in the USA. As usual Welles pulls out all the cinematic stops in this tense tale of deception. Streaming on Kanopy and on DVD at the library.

The Strange Love of Martha Ivers (1946) - Dark secrets from the past, come boiling into the present when a drifter with ties to the most powerful woman in town comes riding in on a train. This riveting noir contains Kirk Douglas' debut performance as a weak-willed man, the superb cast is rounded out by Barbara Stanwyck and Van Heflin. A stunner which is available on Kanopy and as part of the Ultimate Film Noir DVD collection at the library.

One of my favorite things about the 50s is Ritchie Valens. Known for his hits "La Bamba" and "Donna," Richard Valenzuela is remembered as the godfather of Chicano rock and for his untimely, tragic death at the age of 17 in a 1959 plane crash. Buddy Holly and The Big Bopper also died in that crash, leading Don McLean to write a song called "American Pie" from his 1971 album of the same name that alludes to the day of the crash as "the day the music died." The excellent La Bamba, a 1987 film starring Lou Diamond Phillips as Ritchie Valens, pays a fantastic tribute to the future legend.

Perhaps my favorite movie of all-time (definitely my favorite from the 1950s) is Alfred Hitchcock's 1958 masterpiece, Vertigo. Starring Kim Novak and Jimmy Stewart, Vertigo tells the story of a cop who, after suffering a traumatic incident, becomes involved with the mysterious wife of a wealthy businessman after he hires him to investigate her. Vertigo was filmed in San Francisco and San Juan Bautista and is considered to be one of the very best films in Hitchcock's oeuvre. Part romance, part film noir, and part psychological thriller, Vertigo lingers with viewers long after it ends.

In what decade does Forrest Gump recount his life story to strangers who sit next to him at the bus stop?