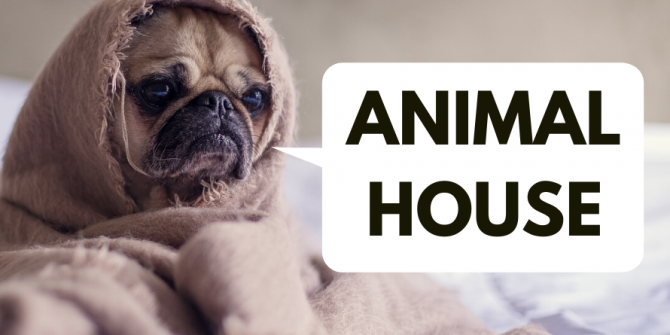 This week my picks are all about DOGS in a sampling from our many free streaming platforms:

Quill: the Life of Guide Dog on Kanopy.
I enjoyed nominated documentary film Pick of the Litter so much last year, that when I stumbled upon this similarly themed Japanese film, I wondered if I would like it as well. Quill: the Life of Guide Dog is a story (not a documentary) about a puppy that is trained to become a guide dog. Dogs are simply heart-warming in any language.

Dog Man on Overdrive Video
This is next on my own watch list. I was intrigued by the title of this film which has nothing to do with Dav Pilkey’s super popular book series for kids. This Dog Man is a film about the life and legacy of Dick Russell, a beloved and extraordinary Louisiana dog trainer who is credited to have trained more than 30,000 dogs.

A Boy, A Dog, and a Frog on Kanopy Kids
Staying with my dog-themed movies, here is one more which is a delightful children’s classic movie. It’s a short live action film set to music, sans dialog, and has a timeless appeal to kids & adults alike!

Finding Joy on DVD
OK, I know I am repeating myself, but honestly the talking dog in this series is too funny!

Kedi: The Cats of an Ancient City is the ultimate movie for cat lovers. Take a tour through the ancient city of Istanbul through the eyes of the multitude of cats who roam freely through the streets, enriching the lives of its inhabitants. Available to stream on Kanopy.

"If you need a companion why don't you go by the pound? And get yourself a hound? And make that doggie proud! Cuz that's what it's all about!"
The Dog Song from animal lover Nellie McKay's album "Get Away From Me" is available to download on Freegal.

The Carnival of the Animals, a grand zoological fantasy by Camille Saint-Saens, is fun for the whole family. You've probably heard the "Aquarium" section in Hollywood movies and "The Swan" accompanying ballet or figure skating.
You can also see Prokofiev's Peter and the Wolf at this same family concert conducted by the great Marin Alsop. Watch it on Medici.tv.

There's no other opera quite like The Cunning Little Vixen, by Leos Janacek. Based on a comic-strip styled Czech novella published in 1920 about the adventures of a clever fox cub, (long before The Fantastic Mr. Fox, which is now also an opera) it features badgers, dogs, chickens and frogs, along with a flurry of other critters -- and even a handful of humans. The composer called it "a comic opera with a sad ending." Streaming on Medici.tv.

The Wild Parrots of Telegraph Hill - this well-loved documentary follows a family of wild parrots living in San Francisco as they are fed and cared for by a formerly homeless musician who finds his own path as he discovers the unique personality of each one of these smart and beautiful birds. An incredible and surprising film. Streaming on Kanopy.

Log in to Freegal and stream Pink Floyd’s Animals. Like any other Pink Floyd album, a start-to-finish listen is an experience. Pigs and dogs and sheep, oh my!

Jam out to the Rolling Stones with “Beast of Burden” and “Wild Horses.”

For pet owners (or anyone who is curious), Spotify has a tool that creates customized Pet Playlists with music to match the personality and demeanor of your animals. At the very least, you and your pet are exposed to a random assortment of music, which is never a bad thing!

If you have any wiggly kiddos are home, bouncing all over the place and raising a ruckus, Freegal has an album just for them. From the Old Town School of Folk Music comes Songs for Wiggleworms. Of the nearly 40 classic kids songs on the album, many of which we regularly feature in our library storytimes, there is a wide assortment of pets and other animals to sing, moo, neigh, and quack about!

Pickle is an unexpected short film in which a couple talk about the many animals they've rescued, the lives they've led on their farm, and their unfortunate demises. Listening to these two talk about their poor pets made me laugh and wish this documentary was just a bit longer.

Kanopy has lots of PBS documentaries to watch. I particularly enjoyed this one about the experiments scientists have designed to study bird intelligence. It's fascinating to watch birds figure out how to get to a snack without being trained, and makes me more impressed when the crows in my neighborhood try to open a forgotten bag of chips.

Tusk - A comedic, strange, and terrifying film about a two men and a walrus.

Tusk by Fleetwood Mac
Unrelated to the film, but a great song by the West Coast rockers Fleetwood Mac. This might be their most experimental work.

The Goat Rodeo Sessions Live- OK so there isn’t really a goat in this group but they do rattle the cages and open the doors between the classical and Americana music worlds. Yoyo Ma, Chris Thile, Aoife O’Donovan, Edgar Meyer and Stuart Duncan find common ground, improvise and cavort together in a very enjoyable concert film.

Swan Lake danced by Nureyev- The immortal ballet danced by one of its greatest stars. Need I say more?

Desire of the Rhino King by Adrian Belew- You may know Adrian Belew from his work with King Crimson, The Bears, Talking Heads, David Bowie or Frank Zappa but on his solo work he has a penchant for animal songs like The Lone Rhinoceros, Big Electric Cat and titles that include a blue whale, antelopes and tuna fish. The whole album is available to stream on this free library service.

Franklin was born with the same tired outfit (shell) every other turtle has, but makes a fashion statement by pairing a hip red scarf and cap. Way to accessorize, Franklin!

As featured in Eckhart, Fortune teller Madam Thel wears a traditional Eastern European long skirt with a puffed sleeve peasant blouse and a classic Serbian robe. She completes the ensemble with a matching head scarf and gold jewelry including gold coins around her neck and waist. You go girl!

Here are 2 episodes from the Nature program that highlights why OUR pets ARE the way they are, and one that will show you how delightful Otters are. These episodes are located on Kanopy

One of my favorite movies as a kid was My Side of the Mountain which is featured on Kanopy. The film was adapted from the wonderful Newbery Honor book by Jean Craighead George.

Why Mosquitoes Buzz in People's Ears, on Kanopy Kids, is the question settled by this Weston Woods studio animated adaptation of the Caldecott Medal winning book by Verna Aardema and the legendary Leo and Diane Dillon.(Gale Biography)

In the sitcom Parks and Rec, Andy’s band was NEVER known by this name.