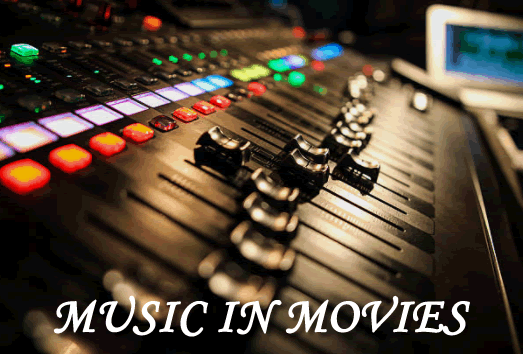 The Qatsi Trilogy:
Koyaanisqatsi: Life Out of Balance
Powaqqatsi: Life in Transformation
Naqoyqatsi: Life as War
Produced and directed by Godfrey Reggio with music by Philip Glass.
This film trilogy is a wordless mix of sound and image that is challenging, engrossing, thought provoking, distressing and truly remarkable.

Wendy Carlos is a musician and composer best known for her electronic music and film scores. She also helped in the development of the Moog synthesizer. Wendy Carlos composed the score for A Clockwork Orange, The Shining and Tron. Daft Punk, inspired by Wendy Carlos, scored the sequel to Tron, Tron: Legacy.

I think the most beautiful and heartbreaking themes in all cinema are both by Italians:

ENNIO MORRICONE: the theme for Cinema Paradiso.
You can stream it on Freegal and see Morricone conduct it himself on Medici.tv, or check out the cd. Better yet, watch this beautiful movie on dvd or bluray. Morricone is one of the greatest film composers and has written many great scores for Hollywood movies as well.

NINO ROTA: Nino Rota's theme for La Strada. You can stream La Strada, the first film to win the Academy Award for best Foreign Language Film and check out the bluray and dvd. Nino Rota also wrote the gorgeous theme for Zeffirelli's Romeo and Juliet and the haunting score for Coppola's The Godfather.

Nino Rota is so tied creatively to Federico Fellini, having written the music for all his films, that one doesn't know if the images created the music, or the music created the images. As Martin Scorsese said, "a special world is created by the music that could only exist in Fellini's films." This is why I think he's the greatest - to me, there would be no Fellini without Nino Rota. You only need to hear three notes, and you know you are in the world of Fellini.

I can't express how much I love the themes from 8 1/2, La Dolce Vita, Amarcord and all the Felliniesque Nino Rota music that evokes the absurd circus of life marching on and on. Fellini films are available to stream on Kanopy, and dvd/bluray.

I recently watched a couple of fun movies about the music of two legends: Bruce Springsteen and The Beatles.

BLINDED BY THE LIGHT tells the story of how Bruce’s music changed the life of an immigrant student in the U.K. and is actually inspired by real life events from Sarfaz Manzoor’s memoir, Greetings from Bury Park. You may want to check out the soundtrack too.

YESTERDAY, my other pick, features Beatles music in a world that has never heard of the Beatles and is just a fun romp with all the timeless Beatles music that changed all our lives. You might be inspired to listen to the music on the soundtrack too!

Joe Hisaishi is the beloved composer behind most of Hayao Miyazaki’s movies, and has also worked frequently with Beat Takeshi. The library has a couple of compilations of his most popular songs, Dream Songs and Hisaishi Meets Miyazaki Films as well as the full soundtrack for Spirited Away, which has recently become popular to sample in lofi tracks online.

I also watched a couple of classics for this theme: Animusic always makes me wish I could build something that would actually perform music the way it does. And The Music Man is a visual treat as much as a musical one- movies like this make me wish I could go back in time and be someone in town, and in this case part of the band.

I'm taking this theme to celebrate the Best Original Song Category at the Academy Awards.

This category is not always prominent at the awards (the nominees for the 2021 awards were all performed BEFORE the ceremony) however it has been around since 1934 covering eighty-seven years of changing music in movies. Another interesting feature about the category is that of the fifteen people who have accomplished winning the Emmy, Grammy, Oscar and Tony (the EGOT), SIX of them have won the Best Original Song Oscar, including the first EGOT, Richard Rodgers. The other Best Original Song EGOT winners are also pretty prestigious: Marvin Hamlisch, Robert Lopez, John Legend, Andrew Lloyd Webber and Tim Rice.

On Freegal, you can check out this list of eighty-four Oscar winning songs, including the 2021 winner H.E.R.'s "Fight for You".

Who is the only singer to perform the theme song for a 007 film more than once?