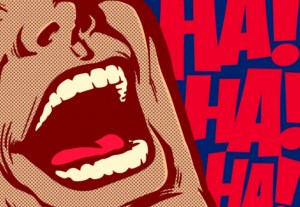 Laughter is the Best Medicine

This week, I found four (!) movies that I'd recommend if you're looking to watch something humorous.

Starting on Kanopy, opens a new window, the film Mushrooms, opens a new window is a dark comedy in the vein of Arsenic and Old Lace. A couple of not so innocent old ladies who taken in a border who turns out to be a bank robber. When he suddenly dies, they concoct various schemes to try and hide his body.

Long Life, Happiness, and Prosperity, opens a new window  is something I watched part of years ago on TV and always wanted to go back and watch from the beginning. I was pleasantly surprised to find out we have it available for streaming. It's enjoyable to watch the characters interact as they're brought together by Mindy's failed attempts at using magic to bring romance into her mom's life. We also have this movie on DVD, opens a new window .

The 100 Year Old Man Who Climbed Out the Window and Disappeared , opens a new window has been on my to-read list for a while. This was another movie that I was surprised to find we had online. This is an enjoyable film that had more action than I was expecting, but may make more sense if you've read the book first. You can also watch it on Blu-ray , opens a new window  and DVD , opens a new window .

Speaking of the Fab Four...

"This patient has the worst case of the blues I've ever seen, but we're not going to lose him. No, not today. Nurse, I need 30 cc's of Comedy Bang! Bang!, opens a new window stat!"

"Yes doctor, here you are."

"I think the patient needs a double whammy dose, nurse get me the 2nd season of Comedy Bang! Bang!, opens a new window"

"C'mon buddy, get those blues out of your system. Laughter is the best medicine, give me a chuckle, a tiny giggle."

"Nurse I hear a titter! We saved the patient!"

THE DURRELLS IN CORFU, opens a new window
Watching this series and this strangely interesting family was often humorous and always such an enjoyable escape. It was hard to believe it was based on their real lives and the books, opens a new window written by the animal-loving youngest son, Gerald.

I love to laugh.

There are plenty of comedies to choose from but which ones do I watch over and over?

The multitalented comedian, musician, author and director Steve Martin, opens a new window has a deep catalog of humorous (and dramatic) films but the one I return to is The Jerk, opens a new window. The film he made with John Candy Planes Trains and Automobiles, opens a new window is also up there on the favorites list and I often watch it around Thanksgiving.

Dr. Strangelove, opens a new window: or How I Learned to Stop Worrying And Love the Bomb is the only comedy by Stanley Kubrick. If you're old enough, like me, to remember hiding under your desk at school during nuclear bomb drills, you'll appreciate this wicked satire. If you're not, my guess is you'll still relate to the dark humor about impending nuclear war. Peter Sellers, opens a new window is brilliant in 3 roles.

Wild Tales, opens a new window, a Spanish-language film from Argentina. Wicked and hilariously deranged satire consisting of 6 stories around the theme of revenge. Best movie wedding scene ever. Don't miss the credits! Nominated for an Academy Award.

You probably never heard of the obscure movie "Untitled", opens a new window. If you've ever found yourself bewildered by avant-garde music and art, check out this satire of modern art and new music which at the same time makes you think about "what sells" vs "art", and is banging on some cans really music? What I like about this movie is that while it makes fun of this world, it isn't mean-spirited and is thought-provoking. Clever, sophisticated and really funny.

Without a doubt, when I am in need of a dose of laughter to make me well, I grab my CD’s and listen to Mike Nichols and Elaine May. They started out as a comedy duo that made it big performing their comedy skits at night clubs in the 50’s. After they stopped performing their skits, they both became wonderful filmmakers. American Masters : Mike Nichols : The Career of a Legendary Filmmaker, opens a new window, found on Kanopy, opens a new window is a fascinating, funny and insightful look into his genius.

For your viewing pleasure Nichols and May : Classic Mother and Son Skit, opens a new window

In 1973 National Lampoon Lemmings, opens a new window was a live stage show that was spun out of National Lampoon Magazine. This stage show helped launch the careers of Chevy Chase, Christopher Guest, and John Belushi. Lemmings was a take-off of Woodstock and was billed as” three days of peace, love and death.” Lorne Michaels saw the show and scooped up the talent for a show he was going to launch, Saturday Night Live.

I first heard the album at 13, and absolutely loved it. It had music, it was funny, and even to-day will come to my aid when feeling down.

Highway Toes, opens a new window is one of the songs, sung by Christopher Guest, as James Taylor

An absolutely “must be seen” is video of John Belushi doing his Joe Cocker impression for the first time. Here he is singing Lonely at the Bottom, opens a new window. The video quality is a bit rough, but oh so funny!

When I'm feeling out of sorts, a good, solid dose of singing and dancing to silly songs with the kiddos always puts me right. One of my favorite children's music performers has created some of the silliest songs to get you moving and playing and smiling - Jim Gill, opens a new window!

You may have seen him perform at your library during our Free Family Concerts in the past or you may have joined in when one of our children's librarians shared his songs during storytime. Either way, I know I've missed getting to experience his music with you and your families and want to remind you all that you can check out his CDs, opens a new window or his books, opens a new window by placing a hold through our catalog.

Each album has so many great songs, I can't recommend just one - give 'em all a spin!

Here are a few picks that guarantee to elicit at least one guffaw from me and sometimes I end up rolling around on the floor laughing.

Making snarky comments during movies is usually annoying, especially when someone else is doing it!  However, when that someone else is Joel Hodgson , Mike Nelson or Jonah Ray with some robots on Mystery Science Theater 3000, opens a new window, then the result actually makes bad movies into something hilarious and wonderful.

Of the following teen comedy films, this one was NOT based on a classic Shakespeare work.