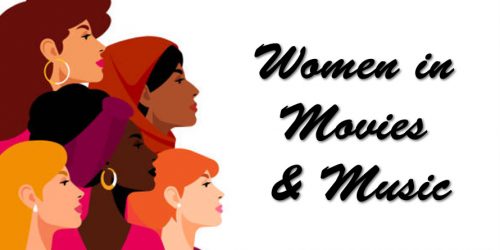 Are girls all sugar and spice and everything nice or gunpowder & lead? Maybe both, while taking back their lives and roaring like champions!

“Who dream with everything they have…”

“With gentle hands and the heart of a fighter…”

“I’m going to show him what little girls are made of, gunpowder & lead…”

“This is my fight song, Take back my life song…”

She was so influential in African music that she earned the nickname Mama Africa.

Miriam Makeba (1932-2008) was from South Africa and she came to prominence in the theaters, shebeens and nightclubs there before she had to flee the racist apartheid system for her own safety. Many nations offered to take her in and over the course of her career; she traveled the world, lived in many countries and sang in dozens of languages.

In the United States Harry Belafonte mentored her and their concert album An Evening with Belafonte/ Makeba (on Freegal) won a Grammy award in 1965. In addition to her life in music, she became a United Nations Goodwill Ambassador, was a global civil rights advocate and remained a staunch opponent of the apartheid system until it fell and she finally returned home. Her best known songs include Pata Pata, Malaika, and Qonqothane (also known as the Click Song.) She co-starred in the movie Sarafina which was based on the Tony nominated play by Mbonjeni Ngema. She lived a dynamic, complicated and important life, but it is her remarkable voice that always brings me back to her music.

In honor of Women's History Month, I want to give a shout-out to The Divine Order, a Swiss film by female director Petra Volpe. It's an entertaining drama about the struggle for women's suffrage in a rural village, which wasn't granted to women in Switzerland until 1971. Streaming on Kanopy and available on dvd and bluray.

There are so many great women filmmakers from all over the world, and some are documentarians. Lauren Greenfield is one whose films are both entertaining and important. She won the Grand Jury Prize for Best Documentary at Sundance for The Queen of Versailles, Her newest film is a disturbing but fascinating look at Imelda Marcos in Kingmaker.

Two favorite female musicians that you may not have heard, are Nellie McKay and Shara Worden. Singer-songwriter and pianist Mckay's breakout album Get Away From Me was released when she was 21 and features her many styles, including rap, jazz, country and pop, along with often satiric and biting lyrics. Classically trained Shara Worden is the lead singer-songwriter and multi-instrumentalist for indie-rock group My Brightest Diamond. I love her album All Things Will Unwind. Most recently, she recorded her opera You Us We All.

Women are finally entering the top rank of classical conductors in greater numbers. Two that are especially renowned are Marin Alsop, who conducts the Baltimore Symphony and led the Cabrillo Festival of Contemporary Music in Santa Cruz from 1992-2016, and Emmanuelle Haim, who specializes in baroque performance. You can hear their performances along with other great women conductors on Medici.tv

Finally, there is the "hidden figure", Nadia Boulanger, without whom we might be deprived of the music of Philip Glass, Aaron Copland, Virgil Thompson, Quincy Jones, among so many others who cite her enormous influence on their composing careers. Many of the ground-breaking composers of the modern era made the pilgrimage to study with "the greatest music teacher who ever lived", at the American School at Fontainebleau in Paris, from 1921 until her death in 1979. In addition to being the first woman to conduct major US and European orchestras, her enormous impact on the sound of the modern world (including classical, jazz, tango, funk and hip-hop) have led to her being called "the most important musical pedagogue of the modern - or any- era", and the most important woman in the history of classical music.

Music is pretty much my thing and I'm a huge fan of women singers and songwriters so this theme was easy in the sense that I have lots of ideas but difficult to narrow it down. I finally decided to go with a top five of my favorites:

Several years ago I first saw a little-known actress named GRETA GERWIG in an independent film that I stumbled upon in the library called MISTRESS AMERICA (2015). I thought she was luminescent in that film, and I became curious about her other work. Then I saw her in FRANCES HA (2012) which she both starred in and co-wrote.

Fast forward to present day and she is now widely known for her other talents as playwright, screenwriter, and director. In the last couple of years alone her writing and film directing of the semi-autobiographical LADYBIRD (2018), and her adaptation of the classic LITTLE WOMEN (2020) has garnered award nomination attention. Her interpretation of Little Women highlighted the independent and powerful spirit of women, and as a director her vision created memorable cinematographic scenes that at times reminded me of a beautiful impressionistic painting.

My first impression of Greta Gerwig was that she was one to watch, and that is even more true today with her multi-faceted talents in telling stories in film.

Women had a huge presence in early 90s dance music. I have the crème de la crème for you, a track list that is sure to get you dancing:

Crystal Waters is an American singer/songwriter.

CeCe Peniston is an American singer/songwriter and former beauty queen.

Jenny B is an Italian singer who performed the vocals for Corona's hit The Rhythm of the Night.

Tracy Thorn is a British singer/songwriter and half of the group Everything but the Girl. Her biggest hit came by way of a Todd Terry remix of Missing.

Ya Kid K is a Congolese-Belgian hip hop recording artist known for her work with Technotronic.

Actress Ida Lupino is most famous for her acting work in film noir but she is also significant for her pioneering work as a film director. During the height of the studio system, she created her own independent film company where she produced and directed a series of socially conscious films.

One of her more controversial works as a director, The Bigamist (streaming on Kanopy), is a noir style mystery look at a man's double life, which is revealed during an adoption investigation. The film is cited as the first American film where the female star directed herself. This film and The Trouble with Angels are both Lupino directed films listed in the book 1001 Movies You Must See Before You Die.

Check out this list of stunning filmmaking from female directors.

While Lisa Loeb was big in the rock scene during the 1990s, particularly with her platinum-selling, #1 hit song Stay (I Missed You) from the movie Reality Bites, she has been just as big in the Children's Music scene in the 2000s and 2010s. She covers a range of ages and styles, with music for babies and toddlers (Lullaby Girl and Nursery Rhyme Parade!), camp favorites (Camp Lisa), and good feelings for everyone (Feel What You Feel). That last one is also a Parent's Choice and Grammy Award winning album!

If you're looking to join in on the fun, singing these songs and others with the kids you know, she also has two song books: Lisa Loeb's Silly Sing-Along and Lisa Loeb's Songs for Movin' & Shakin'.

Whitney Houston’s massive hit single “I Will Always Love You” from 1992’s soundtrack for The Bodyguard was originally written and recorded by this artist in 1973.