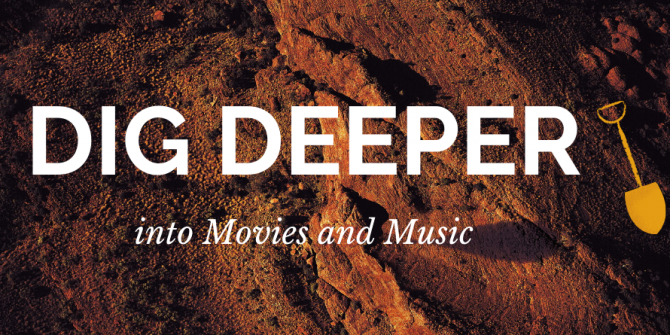 Guitar virtuoso Kaki King never fails to mesmerize with her musical prowess and extraordinary instrumental techniques. She has been dubbed “a genre unto herself” by Rolling Stone based on her ever-experimental sound and avant-garde style. Listen to her innovative body of work on Freegal and check out her ridiculous guitar skills in action on "The Surface Changes" and "Playing with Pink Noise". It’s hard to imagine anyone knowing (and using) every inch of their guitar as well as Kaki King.

In this weeks picks for our Dig Deeper theme, I have a wonderful pairing about gardens. One is a film of fairy-tale-like fiction and the other is a series of very practical & useful non-fiction.

In This Beautiful Fantastic on Kanopy
a young woman who works in a library must fix the overgrown garden where she resides, or else she will be evicted. As she digs deeper to create a fish pond in the garden, her whole world opens up in unexpected ways. Aside from the fact that you had me at, "a woman who works in a library," this film was an absolute delight! I highly recommend this charming gem.

Then, after watching that gem, if you are like me, you might feel inspired to redesign your own garden, and dig deeper into Kanopy to unearth, an informative Great Courses series: Plan the Garden of your Dreams
(6 episodes).

A lot of short films feel very experimental to me and often when I'm digging deeper into a filmmaker's background, short films are a fascinating way to explore a filmmaker's art in a compressed, and powerful way.

Kanopy features a lot of really excellent short films, here are some to help you dig deeper into filmmaking

In the Oscar winning short film, God of Love, a darts champion finds his talents channeled a new way.

In the Oscar nominated A Chairy Tale, a man copes with a chair that refuses to be sat upon.

Check out the Evolution of life on earth in this intriguing animated film.

Finally, the animated surreal and dreamlike Weekends about a boy traveling between his divorced parent's homes is spellbinding.

Children are naturally curious and learn about the world through experimentation, so it stands to reason that they would also enjoy experimental music. Many of the folks who have created television for children have thought so too, as showcased in Mike Haley's tumblr Experimental Music on Children's TV.

I wasn't all that surprised to see so many Sesame Street episodes there, that show being a bit of an ongoing experiment itself. More surprising was how far back these clips go, all the way to the original Dumbo in 1941! You'll also find other favorites like Reading Rainbow, Bill Nye, and Mr. Rogers in the line-up.

If you're interested in something a little newer, you can check out episodes of Sesame Street Season 39 and Season 40 on Kanopy Kids.

And, for something not quite completely different - an intriguing, electronic take on a variety of classical music pieces for children, Too Much Mustard by Professor Armchair can be found in the Alexander Street database.

Have a wild, weird week as you Dig Deeper!

1. If you love Vivaldi’s Four Seasons, dig deeper and discover something new, with the Four Seasons Recomposed by Max Richter. It may seem sacrilegious to alter such a classic, but I loved hearing these changes and it enabled me to hear something so familiar with new ears. I heard this performance with Daniel Hope live, and found it really thrilling. You can also see the documentary which explores the genesis of this piece and learn more about Max Richter and Vivaldi. They are both streaming on Medici.tv.

3. If you are an opera lover like me, it was disappointing that the Metropolitan Opera had to cancel the screening of Handel's Agrippina. This masterpiece by Handel tells the story of Agrippina, mother of Nero who becomes a Machiavellian monster capable of manipulating the manipulators to ensure that her son becomes emperor. This baroque opera could not be more modern or relevant. And what gorgeous music. Dig deep into this opera and hear excerpts with Facing Agrippina on Medici.tv. (for mature audiences)

4. Ai-Amour, Carlotta Ikeda and her Butoh: a choreographer’s universe explores the Japanese postwar dance form Butoh, with Ikeda and her all-women Butoh troupe. Butoh is a Japanese dance that was created after World War II, in reaction to the trauma of Hiroshima. Streaming on Medici.tv. For more videos of Butoh, log into Kanopy.

5. Explore how the culture of toxic masculinity in the United States harms our boys and young men in The Mask You Live In, as it documents their struggle to stay true to themselves while negotiating America's narrow definition of masculinity. Streaming on Kanopy.

Digging Deeper is this year’s Summer Reads theme and there are lots of ways to interpret this theme.

How about digging into your family’s past?

And then there is archaeology!

The Great Courses series, produced with National Geographic, Archaeology an Introduction to the World’s Greatest Sites delves into the history of the science and the many tools and processes used to uncover and interpret the history of ancient sites around the world.

The film The Lost City of Cecil B. Demille documents the excavation of the set of the great director’s immense set of the movie The Ten Commandments. After that movie wrapped the set had been buried beneath a sand dune on the outskirts of a small California town.

The remarkable Chinese documentary Behemoth: A Meditation on China’s Coal and Iron Industries shows that even in the rigidly controlled country of China, muckraking journalism is alive and well. The images director Zhao Liang puts on the screen are stunningly beautiful and disturbing.

Check out Mineral Explorers season 1 and accompany mineral dealer Thomas Nagin as he visits countries around the world and documents how crystals, gems and precious metals are wrested from the earth.

All of these videos are available through Kanopy.

Crooked Officer from the album Til Death Do Us Part by The Geto Boys on Freegal Music.

P.S. I Can't Breathe on Kanopy.

There are so many ways to dig deeper. You can investigate deep into something, perhaps “dig deeper” into experimental music, or discover lost treasures from a long ago time. Here are some suggestions.

To start off your digging expedition, I suggest The Detectorists. Two friends in England are on a quest to find old roman coins and artifacts with the help of their metal detectors. A great comedy, full of all the intrigue behind dectectorist’s clubs in rural England.

Perhaps you’ve always wanted to dig into your roots. You will find an excellent series on Kanopy, Discovering your Roots : An Introduction into Genealogy. My family came around the horn, from Ireland to San Francisco, and locating ships records has been difficult, in Episode 6 “Your Ancestors in Ship Passengers Lists” you will learn how to make sense of all these documents.

Reverend Horton Heat, Psychobilly Freakout.. I think you will…dig it!

Alice Coltrane on Alexander Street was one of the only people to use a harp in jazz music, and the unusual combination sounds great. She is also featured on the album Elements with Joe Henderson. You may also be interested in The Girls in the Band on Kanopy, about the history of female jazz musicians, and Betty Davis: They Say I'm Different on Overdrive (Alice Coltrane is not featured in either, but they both make for related, great viewing).

I also went looking for experimental films this week. On one end, I found this collection of technical experiments that become art when viewed, and on the other, a documentary about unusual architecture in Japan.

Also Dig Deeper into this experiment:

This stop motion short film was made entirely by one person.

I grew up in a household that valued music. Both my parents were music fans, and my older brother and I followed suit. Certain bands and artists throughout my life have opened musical doors and illuminated new styles and genres that have added to my listening enjoyment and the soundtrack of my life. I was pleased to find that Freegal includes several albums by long-time experimental art collective and performers The Residents. Long known for their surreal live shows and anonymity, The Residents definitely helped to show me how the limits of music can be stretched and molded to create unique listening experiences. Take a listen on Freegal to Title in Limbo, a collaboration between The Residents and equally experimental rockers Renaldo & The Loaf.