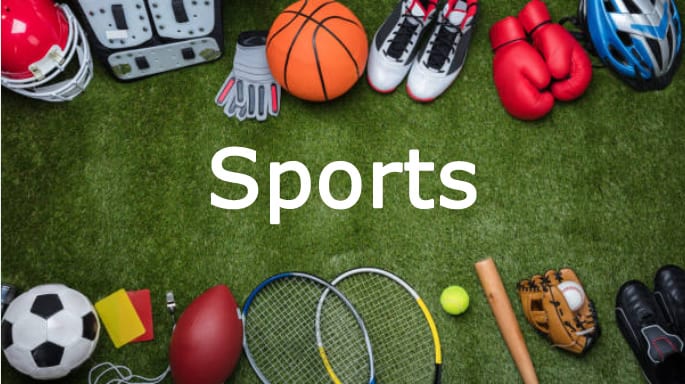 One of my favorite sports songs for kids is the classic, Take Me Out to the Ballgame, which is super fun to act out together in storytime or wherever you want to pump up the audience. There are as many renditions as there are favorite baseball teams - a few I like are those on the albums Classic Songs & Traditional Tunes by Andy Z and Wiggleworms Love You by the Old Town School of Folk Music.

If you've been missing the roar of the crowd or are simply in search of some great sound effects, Freegal has streaming and downloadable albums like 100 Sports Sounds - Football, Hockey, Baseball, Arena Crowds and More and Crowds, Applause & Laughter - Sounds of People.

For a less than instant replay, On the Move by Greg & Steve will take you back to the synthetic beats and fitness focus of the early 80s with their guided movement songs. After following along with the Warmin' Up song, try out a range of activities and actions with the Sports Dance.

And, for a deconstructed (and silly) look at some classic sports, Froggins & Bug explore the rules and names of common games while jazzy music plays in the background of a song titled Sports on their album Dessert Island.

One of my favorite documentaries was recommended to me by a running-enthusiast coworker years ago. The Barkley Marathons tells the history of the namesake race and explores the journeys of several participants that attempt to complete it. It is oddly enticing and charming and can be watched on Youtube for free. Same Same But Different is a documentary where various backpackers are interviewed about their experiences and motivations while exploring parts of Asia, and it is also available to watch for free on Youtube.

Kanopy, as always, has some documentaries worth checking out: Pumping Iron chronicles Arnold Schwarzenegger’s quest to maintain his reputation as a bodybuilding champion, after a string of consecutive Mr. Olympia wins in the 70s. All I Need is a Ball  is a short film about an attempt to form a female football team in Spain. Kim Swims tells the story of an injured ballerina who refocuses her energy into swimming and sets out to complete the cold 30 mile swim between San Francisco and the Farallon Islands. Red Dot on the Ocean shows the harrowing journey Matt Rutherford made when he attempted to sail through the Northwest Passage alone between 2011 and 2012. And finally, Aspen takes a different view, examining the daily lives of people who live in the titular outdoor recreation destination in Frederick Wiseman’s signature sparse style, merely showing events as they happened with no narration or context.

Even though I may not be the biggest sports aficionado, I have appreciated plenty of enjoyable sports-themed films. Here are three favorite picks from each sport listed below that mostly have a feel-good winning vibe to them!

Movies:
I Tonya: This dark comedic docudrama depicts the rise of Olympic figure-skater Tonya Harding and her downfall amid one of the biggest scandals in sports history. Margot Robbie is the rough-hewn Tonya and the fabulous Allison Janney is her overbearing mother. Streaming on Kanopy.

Battle of the Sexes: an entertaining look at the infamous match that took place in the 1970s between self-described "Male Chauvinist Pig" ex-tennis champ Bobby Riggs and Billie Jean King. BJK took on the sexist tennis establishment and won, but the film also delves into their private lives. With spot-on performances by Emma Stone and Steve Carell.

Harvard Beats Yale 29-29: I know next to nothing about football, so it's kind of a miracle that I even watched this documentary. But this obscure little movie was spellbinding, and I'm not alone in being a non-fan who absolutely loves this movie. It's more than just one of the best sports documentaries ever made - it's a portrait of young men of different backgrounds in 1968, being tested on and off the field during one of the most turbulent times in our history. Streaming on Kanopy.

Music:
Chariots of Fire soundtrack: Academy Award winner for best original score in 1981 and still a timeless classic by electronic composer, Vangelis. The award-winning movie is great too. Streaming on Freegal.

Bolero: British ice dancers Torvill and Dean became the highest-scoring figure skaters for a single program of all time after skating to Ravel's Bolero in the 1984 Winter Olympics in Sarajevo. Streaming on Freegal and medici.tv.

Riding Giants
This film presents the history of surfing, with a special interest on Big Wave Surfing at Mavericks in Half Moon Bay. Jeff Clark and Laird Hamilton are featured for their bravery and style. Fantastic music.

Step into Liquid
Shot in waters all over the globe, director Dana Brown takes on tall waves and surfers who live to challenge them.

Between Land and Sea
The documentary shows a year in the life of an Irish surf town at the mercy of the Atlantic Ocean. Ireland has become a prime surfing location since about the year 2000, which has changed the sleepy town of Lahinch and provided new opportunities.

Ocean Driven
An award winning film documenting surfer Chris Bertish as he surfs wave reaching up to 60 feet. The danger of the ocean at Mavericks is keenly shown.

Sporting events excite all the senses. One of my favorite parts of watching a baseball game is hearing the walk-up music each player chooses when coming up to bat (or when a pitcher emerges from the bullpen). It gets the fans pumped and gives them a glimpse into the players’ personalities.

Check out the walk-up music playlists for the San Francisco Giants and the Oakland A’s. I love to see the variety of musical tastes.

In the 1993 coming-of-age baseball comedy The Sandlot, Benny “The Jet” Rodriguez grows up to become a professional baseball player for this team.