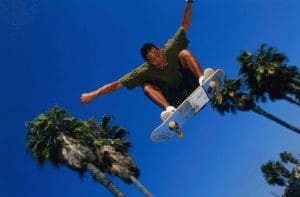 Go Skateboarding Day is an annual promotional event organized by the International Association of Skateboard Companies (IASC). It was created in 2004 to make skateboarding more accessible. Skateboarding traces its origins back to scooters made of wooden crates in the 1920's. Skateboarding first gained popularity in the late 1950's in southern California. Around the 1970's, surfers developed a style that was low to the ground, often using their hands to pivot or turn. In the 1980’s, skateboarding exploded into mainstream popularity as skateboarding videos began to show skaters the variety of moves that were possible on a skateboard. During this time, skateboarding shifted from low-to-the-ground moves (first off in empty swimming pools!) to complicated technical tricks performed in the air. Below is a list of books, DVDs, magazines, and games for teens about skateboarding.

Skateboarding Is Not A Crime

Skate for your Life

The Basics of Skateboarding

This Is My Element

Girl Out of Water