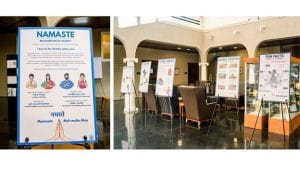 Darshana: A Glimpse into Hindu Civilization is on Display Through Thursday, November 10

WHAT: The Milpitas Library is proud to present Darshana: A Glimpse into Hindu Civilization. This exhibit contains a colorful overview of Hindu concepts and practices, offering participants an opportunity to learn about one of the oldest civilizations in the world. This installation features a variety of topics, ranging from yoga and divinity to mathematics and administration. Created by Hindu Swayamsevak Sangh (HSS), this traveling exhibit aims to raise awareness on Hindu thinking, contributions and common practices. Darshana: A Glimpse into Hindu Civilization has been hosted by various institutions nationwide. The exhibit will be on display through Thursday, November 10. The public is invited to a special reception on Sunday, October 23 at 4 p.m. There will be speakers available to answer questions about the displays. Both the exhibit and reception are free and open to the public. No registration is necessary.

Exhibit on display through Thursday, November 10. Reception is on Sunday, October 23, 4 p.m.

WHY: The Santa Clara County Library District is dedicated to promoting cultural enrichment, knowledge and ideas with programs such as Darshana: A Glimpse into Hindu Civilization. According to Pew Research Center, there are about 1 billion Hindus around the world, representing 15% of the global population. There is also a large Hindu community in the Bay Area. Compiled by Hindu Americans, Darshana aims to clear misconceptions, introduce key terms and inspire further research into the rich culture.