SANTA CLARA COUNTY, CALIF. – Voice of Youth Advocates (VOYA) magazine has selected a middle school student from Milpitas as a winner in their annual teen poetry contest. She was nominated by the Santa Clara County Library District (SCCLD) after receiving an award in its 2018 teen poetry contest.

“Milpitas Library is a big supporter of poetry, sponsoring semi-monthly Poetry Slams, monthly meetings of local group The Peaceful Poets, and other events where teens have a chance to share their work with peers and pursue their love of verse,” said Stephen Fitzgerald, Milpitas Community Librarian. “It’s great to see a member of our community honored by a prestigious publication like VOYA.”

Founded in 1978, VOYA is a library journal dedicated to the needs of young adult librarians, as well as the advocacy and promotion of young adult literature and reading. The winning, humorous poem is titled “Apology Poem to Teacher.” She received a prize and had her poem published in the April issue of VOYA.

SCCLD has an annual teen poetry competition in April as part of our celebration of National Poetry Month. Information about the contest, including the entry form, list of last year’s winners, and copies of their poems, can be found at www.sccl.org/teens/contests/.  Entries must be received by April 30.

One of last year’s two SCCLD-nominated VOYA awardees was from the Milpitas Library service area. The next Peaceful Poets open mic night is on Wednesday, April 17. Santa Clara County Poet Laureate “Mighty” Mike McGee, friend of Milpitas Library and frequent host of Poetry Slam events, will MC a Poetry Recitation Contest on Wednesday, April 24. Both events are at 6 pm in the Library’s Auditorium.

The Santa Clara County Library District (SCCLD) promotes knowledge, ideas, and cultural enrichment. Its collection includes more than 2 million books, videos, CDs, DVDs, Audiobooks, eBooks and extensive online resources accessible from home or work. In 2014, SCCLD celebrated one hundred years of service to local residents. For the last eleven years, SCCLD has been consistently recognized as one of America’s Star Libraries by Library Journal. In 2018, SCCLD was ranked among the top ten large libraries in the United States in the Library Journal Index of Public Library Service. In 2014 and 2015, SCCLD won Innovator Awards from the Urban Libraries Council. 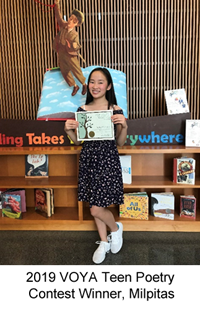