We apologize that, due to the launch of our new website, URLs in this older news release may have changed.  Please contact us if we may be of help with locating current URLs for the discussed services.  We will be happy to assist.  Or, you may consider using our website search box to locate current information on the desired service.

Library District adds award to list of achievements in 2018

SANTA CLARA COUNTY, CALIF. – The Santa Clara County Library District (SCCLD) has been rated as the 7th best library system in the country and 1st in California with expenditures over $30 million, receiving a four-star rating from the Library Journal Index of Public Library Service. The national rating system recognizes top performing public libraries across the nation. SCCLD has been named a Star Library for 11 consecutive years, since the inception of the award by Library Journal.

“This four-star rating validates how we deliver not only high quality resources, but also valuable programs and relevant materials,” said SCCLD County Librarian, Nancy Howe. “We could not have reached this goal without our dedicated staff and volunteers, who are committed to providing such outstanding services to our patrons.”

Some of SCCLD’s major accomplishments for 2018 include: 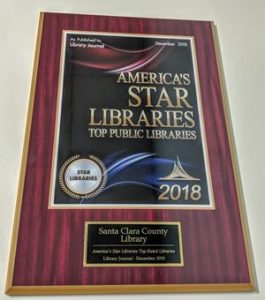 The Santa Clara County Library District (SCCLD) promotes knowledge, ideas, and cultural enrichment. Its collection includes more than 2 million books, videos, CDs, DVDs, audiobooks, eBooks and extensive online resources accessible from home or work. In 2014, SCCLD celebrated one hundred years of service to local residents. For the last eleven years, SCCLD has been recognized as one of America’s Star Libraries by Library Journal, which in 2018 ranked SCCLD among the top ten large libraries in the United States in its Index of Public Library Service. In 2014 and 2015, SCCLD won Innovator Awards from the Urban Libraries Council.