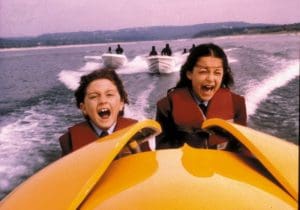 Mariachi musicianship is often a family tradition that is passed down from generation to generation. Families frequently form their own musical groups which serve as necessary training grounds for new musicians to develop and mature. Ensembles also form out of existing social relationships and other common factors like age, education, or other shared identities. An example of an age-based group is Mariachi Los Changuitos Feos from Tucson Arizona, which is a group that distinguishes itself as an illustrious youth group. The group’s history first began in 1964 when it was founded by current members of the internationally acclaimed Mariachi Cobre. Today, Mariachi Los Changuitos Feos continues to exist as a youth ensemble where kids are able to perform and earn money for their future college careers. Needless to say, this is one group in which only kids are allowed.

Rugrats- One of my favorite kid-centered shows, Rugrats is the kind of cartoon that is smart and hilarious. A group of babies and toddlers make sense of the world as best they can, often leading to misunderstandings that make for funny happenstances. There's also a "villain" in the form of the protagonist's older cousin, who confuses the kids for her own mischeivous delight, just as you might expect from an older cousin!

The Little Rascals- The 1999 movie based on the 1920s and 1930s characters, The Little Rascals features some adorable kids who decide in their "He-Man Womun Hating Club" to enter a go-cart race. Things don't always go as planned, as the club leader is worried that his best friend is distracted by the girl he likes, and the town bullies are on their tails. It's a fun movie that sees the main character turning a new leaf. Maybe girls aren't so bad after all?

Harriet the Spy-  Based on the book by Louise Fitzhugh, this movie is about a quirky girl who is obsessed with spying on her neighbors and friends, and recording it all in her top secret spy journal. While her imagination is something to be admired, her classmates don't appreciate the bluntness of some of her observations when her journal is discovered and read-aloud to all of her friends. She must discover how to make amends, and learn the lesson that things aren't always as they seem. To learn the truth about a person or situation, it requires more than a quick judgement.

The Neverending Story- A magical land is in trouble in this story within a story, based on the book by Michael Ende. Sebastian is a quiet boy who escapes from his troubles through books. To his surprise, he finds that he is mysteriously connected to the story he's reading, and in fact, the fate of all of the characters he grows to love depends on him. Can he save them all before it's too late?

Oddly, I can't remember seeing many movies as a kid - but every year The Wizard of Oz would be on tv (although we only had a black and white set) and we would love watching that. Except when Dorothy was locked in with that hourglass, and time was running out, I was so distressed I had to leave the room. But I still love that movie.

As an adult, these were my favorite movies to watch with my young kids:

The Little Engine That Could (this old-fashioned one, only available on youtube)

Rusty and Rosy Sing Around the World from the Waterford Institute, part of a series for learning to read - so wonderful! I especially love Sweet Guava Jelly There,  Egg on a Queen and  A Very Big Name.

And here is the main soundtrack to life with my young kids:

Raffi: Everything Grows and all the Raffi cds.

Nancy Raven: Morningtown Ride and Count Ten/One of the Family on the album Singing, Prancing and Dancing, which features songs by Malvina Reynolds and Woody Guthrie.

Pete Seeger:  Grey Goose, I Had a Rooster, Fly Through My Window on the album Birds, Beasts, Bugs & Fishes

Train Is A-Coming, Bought Me a Cat, All Around the Kitchen on the album American Folk, Game & Activity Songs

As a kid I loved movies or songs that suggested there was adventure just around every corner.

Some of my favorite adventuring movies and music are:

Of course the Okee Dokee Brothers Americana inflused approach to children's music has fueled adventures across the countryside in their Adventure Series of albums. I'd like to especially highlight their Grammy winning album Can You Canoe? which is so tuneful and fun and really encourages an appreciation of the countryside.

A group of boys find a dinosaur fossil and take a trip on a river through a cave and discover-----living dinosaurs in Karel Zeman's incredible A Journey to the Beginning of Time, part of the Three Fantastic Journeys film set. The stop motion effects are still impressive!!

What could be in that gigantic box that young Milo received?  As it turns out, it's a portal to another world entirely in legendary animator, Chuck Jones' film The Phantom Tollbooth. Milo's adventures are based on the Norton Juster novel of the same name.

A young boy gets shipwrecked on a deserted island and meets an unexpected friend in the transcendentally gorgeous film, The Black Stallion. Director Carroll Ballard's film contains images so strikingly beautiful they become almost tactile.  His later film, Fly Away Home, also is filled with adventure and the beauty of the natural world as a young Anna Paquin attempts to teach a group of goslings to fly.

A more serious adventure lays ahead of Natty Gann in the lovely Journey of Natty Gann as she travels from Chicago to Washington state in search of her father during the Great Depression. The film is beautifully directed by Jeremy Kagan with a potent sense of the unknown lying in front of the intrepid Natty Gann.

Finally, I have to recommend the great director Alfonso Cuarón's film A Little Princess which follows Sara Crewe as she journey from wealth in India to poverty in the United States but manages somehow to persevere.  Another film that shows incredible beauty as it tells its familiar tale.

In the 2021 animated film Encanto, which character has the power to control the weather with their mood?