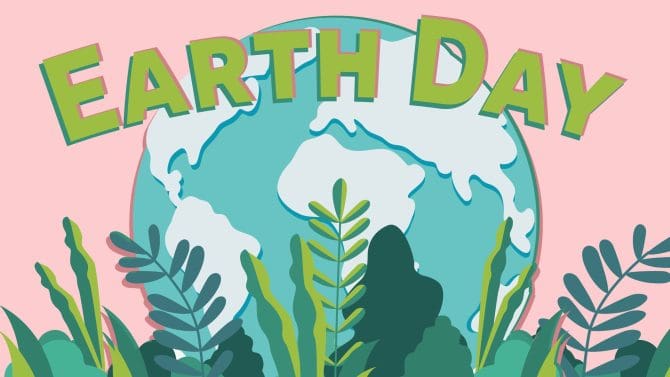 The Milpitas Monster is a monster movie filmed locally, about sentient garbage that craves nothing more than consuming more garbage. It may or may not make you care more about the environment, but either way you’ll be entertained. [Don's note: A cult favorite, actually directed by high school teacher Robert Burrill with students from Milpitas High acting and helping with production. Check out the trailer.]

On Kanopy, Sand Wars illuminates an unexpected ecological problem: the overuse of sand. A component of concrete, sand is becoming a scare resource in a world with a growing need for homes, other buildings, and infrastructure. It was shocking to learn that we've depleted our stores of sand so much, that we're now spending billions of dollars to extract it from the bottom of the ocean. Also available on DVD.

Also on Kanopy, Human Flow (Blu-ray/DVD and The Hungry Tide are dramatic documentaries focusing on those who are most affected by climate change. Tunisia is an hourlong film about the peril the country's coastline faces from continued development by the tourism sector. And looking at environmental impact another way, the films The Meaning of Vanlife and Minimalism (DVD) explore how some people are choosing to make extreme changes to their lifestyles, in part to limit their impact on the environment.

When even the youngest humans connect to caring about the earth, the small things they do every day build toward a better planet for all living things.

Looking for musical inspiration and joyful affirmation for your kiddos? Earth: Songs for the Earth and All Beings by San Francisco's own Charity and the JAMband offers groovy anthems and meditative melodies, HomeEarth by the Kindie Duo from Chicago, Wendy and DB, reminds us of all the great things about our home, and Mundo Verde / Green World by Latin GRAMMY award winner Mister G will take you on a toe-tapping, bilingual tour of the planet. Earth Rocks!

The 2009 documentary The Garden about the desperate effort to save a 14-acre urban community garden in South Central Los Angeles still devastates me when I think about it. Watch it on DVD or stream it on Kanopy.

Environmentalist and Grammy winning composer, Ricky Kej creates sonic landscapes that celebrate the beauty and fragility of nature. His work strikes just the right meditative tone for me when I'm contemplating the complexities of our planet.

In Winds of Samsara, he works with flutist Wouter Kellerman for a musically intricate global fusion of music that is worth experiencing.

In Divine Tides, Police drummer/composer Stewart Copeland lends both abilities to this celebration of the eternal beauty of the world. Check out the stunning YouTube video, shot in the Himalayas.

If Al Gore scared us all about the calamity of climate change in the Oscar winning An Inconvenient Truth, filmmaker Damon Gameau shows us the possibility of positive change in his film 2040, a film about the hopeful possibility of the future. [Don's note: 2040 was a great suggestion from a new team member, we are looking forward to introducing soon!]

The writings of this author inspired Marvin Gaye to write "Mercy Mercy Me".