After she left Tahiti, the fire goddess Pele sailed to the island of Hawaii and decided that her home would be in Mount Kilauea at the Halemaumau crater. 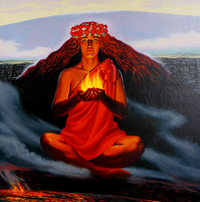 Recently Kilauea has been spewing out a lot of fire and lava. People and other gods pretty much stay out of her way so Pele must really be upset about something! Get to know a little more about Pele’s temper and what she does when she is displeased.

Here are some books that may help you out:

The Volcano Goddess Will See You Now

Myths and Legends of Australia, New Zealand, and Pacific Islands