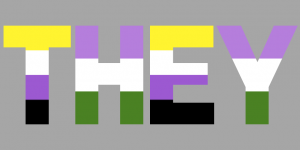 After over 600 years of being used as a gender-neutral singular pronoun, last year they became Merriam-Webster's Word of the Year. In September 2019 Merriam-Webster officially added the nonbinary pronoun sense of they to the dictionary. Merriam-Webster includes a definition of they as "used to refer to a single person whose gender identity is nonbinary."