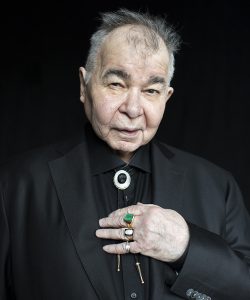 While sheltering-in-place, I read an article about the musician John Prine. Mr. Prine, a musician of Folk, Bluegrass, and Country genres, has been in the hospital since March 26th, ill with COVID-19. His wife Fiona stated that "He is very ill, and yet I am hopeful."

Mr. Prine released his first album, the self-titled John Prine in 1971. I was 15 when I first heard it and was immediately transfixed by his soft singing voice and his tender lyrics in songs such as Hello in There -  a song of loneliness as we get older. From this album he was discovered by Kris Kristofferson, who once remarked that Prine wrote songs so good "we'll have to break his fingers."

He released 18 albums; the last one, 2018's The Tree of Forgiveness, was nominated for a Grammy for Best Americana Album, bringing him to a total of 9 Grammy nominations. He won twice in the category of Best Contemporary Folk Album, The Missing Years (1991) and Fair & Square (2005).

From Freegal try Souvenirs, released in 2000, which includes the classic "Angel From Montgomery."

Be sure to listen to Knocking on Your Screen Door, which was nominated for Best Americana Roots Song in 2018.

I highly recommend getting to know John Prine. His music will delight you, entertain you, and calm you during these worrisome times.

His voice has been silenced, but I hear him loud and clear. Mr. John Prine died April 7th, 2020 after developing COVID-19 symptoms.  He is survived by his wife Fiona, and his 3 sons, a daughter in law, and his grandchildren. His death has been acutely felt around the world.

"When I Get to Heaven" a song from his last album, let us know what John was looking forward to when he gets to heaven.