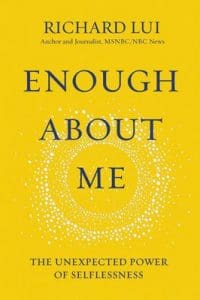 Richiard Lui's Enough About Me is one of the selected books for 2022's Silicon Valley Reads theme: "The Power of Kindness, Resilience, & Hope."
Lui, a news anchor/journalist, faced a tough decision when his father was diagnosed with Alzheimer's. Working a reduced/modified schedule, he joined the family caregiver team to care for his Dad - a decision, not without struggle, that led him to explore the meaning of selflessness. In the book, Lui shares the lessons he learned by using examples from personal experiences, news stories and scientific studies. He discovered that "put others first" in decision-making is something that can be trained and practiced, much like training & practicing our physical muscles. The result, according to Lui, is a path to greater joy and a more fulfilling life.
If you liked this title, you may also like:
Enough About Me