All SCCLD Libraries are temporarily closed. (Read More) Do NOT return library materials until the library reopens. There will be no late fines on items returned.

Current holds on physical materials will be available when libraries reopen.  No new holds will be accepted.  Ask Us: Account Questions, or Ask a Librarian

The First Transcontinental Railroad, the greatest engineering project of the 19th century, was completed after six years of grueling labor under treacherous conditions. On May 10, 1869, Leland Stanford tapped the ceremonial Golden Spike, into a pre-drilled hole connecting the Central Pacific and Union Pacific railroads, signifying the unification of the country by this railroad. According to Central Pacific President Stanford, without the Chinese, it would have been "impossible to complete the western portion of this great national enterprise, within the time required by the Acts of Congress.” 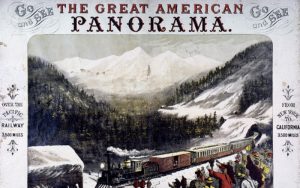 States was as monumental as the efforts of the Chinese laborers who built it. Yet no firsthand account – a letter, diary, or memoir - by the Chinese workers themselves has ever been found despite the research efforts of many historians as detailed by the Chinese Railroad Workers in North America Project at Stanford University. Historians have only been able to piece together information about the Chinese laborers through accounts of witnesses and others involved in the building of the railroad. Reports and letters by managers and engineers to company and government officials, memoirs, and descriptions by journalists and travel writers make up our knowledge of who these “silent spikes” were and how they lived and worked. This picture titled, The Great American Panorama, is a lithograph poster dated 1869 for the Transcontinental Railroad, depicting Chinese laborers and snow sheds on the Central Pacific Railroad.

To commemorate Asian Pacific American Heritage Month and the 151st anniversary of the completion of the Transcontinental Railroad, join us online on May 16 at 3 PM for a talk by Roland Hsu, PhD, Director of Research for the Chinese Railroad Workers in North America Project at Stanford University. Dr. Hsu will present new findings on the lives and legacy of the Chinese migrant laborers who were indispensable to healing post-Civil War America and bridging the Pacific.

Register for the Dr. Hsu's talk Chinese and the Building of the Transcontinental Railroad on May 16, 3 PM: RSVP

A Zoom link will be emailed the day before the event.

“The Transcontinental Railroad Wouldn’t Have Been Built Without the Hard Work of Chinese Laborers,“ Smithsonian Magazine, https://www.smithsonianmag.com/smithsonian-institution/transcontinental-railroad-chinese-laborers-180971919/. Accessed May 4, 2020.

“On the eve of the 150th anniversary of the First Transcontinental Railroad, whither the Gold Spike?” Stanford News, https://news.stanford.edu/thedish/2019/05/07/on-the-eve-of-the-150th-anniversary-of-the-first-continental-railroad-whither-the-gold-spike/. Accessed May 4, 2020.