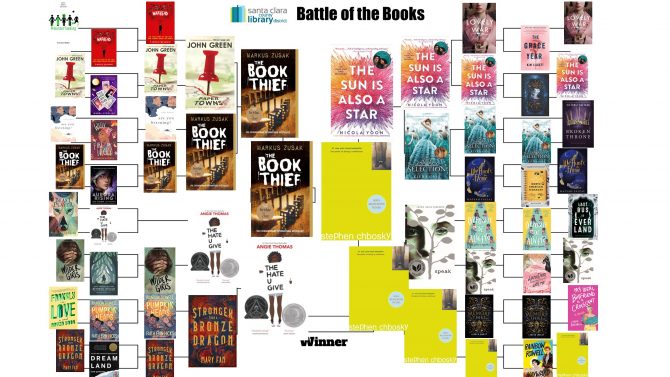 After a very close fourth round with the winners, The Book Thief and The Perks of Being a Wallflower, edging out their competitors by only a couple of votes, we are now at the final round to determine the victor in the 2020 Teen Book Battle.  Will it be Marcus Zusak's novel of a young girl using stories to sustain her family and hide a Jewish man during WWII or Stephen Chbosky's coming of age novel about a shy high school student navigating through his own uncharted territory of high school life.

This is our final week of Summer Reading and your last chance to be entered into the prize drawing for voting to decide the winning book of the 2020 Teen Book Battle.

Cast your vote for your favorite book in the Final Round.

Final Round of voting begins on July 27 and the winning book announced on August 10.

Final Round of the 2020 Teen Book Battle