Walk up and curbside holds pickup services are available (see your library's schedule).  Lobby service has changed to walk up as of Monday, Nov 30.  (Read More)

Limited services are available, including walk up and curbside services.  Virtual programs and library support (Ask Us) are available Mon-Sat (excluding holidays). Some services listed in our website are currently unavailable.  View our list of currently available services.

Often a movie or a series can take you to another place and time, and here are a few that will take you to the land down under. The escapades in these series take place in Australia and New Zealand and are really some great watchable getaways.

Recently I stumbled upon a couple of these series from down under that captured my attention, and I them found to be a refreshing change of pace. Of course there are so many enjoyable British imports - The Durrells of Corfu, Downton Abbey, The Great British Baking Show, anything Jane Austen, The Crown - but these lesser-known series from Australia have been a pleasant surprise. Check one out and see if you agree.

800 Words - A columnist, George Turner, and his two children move from Australia to Weld, a small town in New Zealand. There are 3 seasons worth of watching their lives transitioning in this lovely little place, complete with an array of quirky characters in the small town. 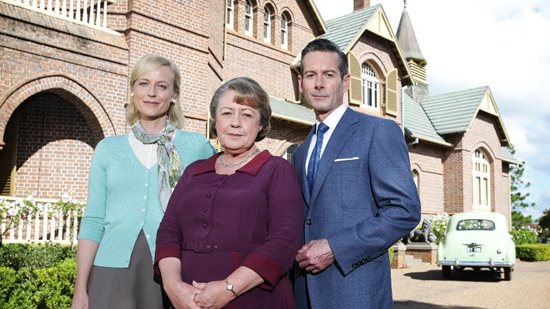 A Place to Call Home - Sarah moves back to Australia after surviving the turmoil of World War II in Europe. She hopes to reconcile with her mother, but instead she lands in the small town of Inverness near Sydney where her life takes a whole new path after encountering the Bligh family. Perhaps this is the down under version of Downton Abbey as we follow these characters through thick and thin and meet a strong Australian matriarch at the helm. There are six engaging seasons with cliffhangers at the end of nearly every episode.

Jack Irish - Follow the adventures (and misadventures) of this former criminal lawyer turned private investigator. It’s a series of noir mysteries that our seemingly haphazard hero somehow resolves. Despite its dark seriousness, there is a sense of humor threaded through it that gives this series a certain charm.

Saving the best piece of news for last...
One evening after finishing season two of a Place to Call Home on DVD, I was left with another cliffhanger, and a need to see what would happen next... what was I to do? In my desperate state, I went to the library website and made a great discovery; I was able to access the next season 3 episode on Acorn TV right then and there.  Whew, what a relief!

So I had to share my discovery here.  All of these series are not only available on DVD in the library, but they are also available online on Acorn TV which is accessible to you free with your library card! So enjoy a little getaway down under!