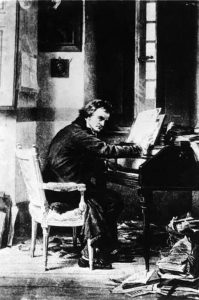 Celebrate Beethoven's 250th birthday by listening to performances on Medici.tv.  I personally love piano music, and also the music of Beethoven. When he arrived in Vienna, Beethoven was initially famous as a pianist first, and a composer second, but most of the solo instrumental music he composed was for the piano, writing a total of thirty-two piano sonatas.

Sonata no. 26 in E-flat Major op. 81, Les Adieux was written in 1809. Napoleon’s attack on Vienna that  year lead to the separation of Beethoven and his close friend, the Archduke Rudolf.  The first movement, Das Lebewohl is about the sadness of farewell, and Abwesenheit, the second movement, is about the loneliness of missing absent friends. The third movement, Das Wiedersehen, is more cheerful, as Beethoven looks forward to their eventual reunion. After this spring of sheltering in place, the emotions of Les Adieux are likely familiar to all of us. Please enjoy this Youtube video of Daniel Barenboim playing the third movement of Les Adieux

If you want to hear the complete sonata, you can find complete performances of Les Adieux and many more Beethoven works at Medici.tv. Have a different favorite composer? Look them up! Setting up your free account with your library card and PIN is your ticket to their virtual concert halls, opera houses and classrooms until live performing arts resume. If you love classical music, you owe yourself a visit.